Oh hey guys, remember me? You see, the great thing about having your own personal blog, is that there are no set deadlines! And as a “writer”, the procrastination is strong within me. So if I don’t have deadlines… well, nothing gets done.

But here we are months, and months later. And I can tell you this post was NOT worth the wait.
********
Over the last few years, I’ve found myself becoming a bit of food and drink snob. I mean, my partner Greg gifted me with a meat grinder/sausage maker for Christmas so I can make my own, ethically sourced sausages… is that hipster enough for you?? (I know, I rolled my eyes aggressively typing that sentence… I realise who I have become.) But more on that to come…

However, this December I went back to Canada for the first time in almost 3 years. It was so wonderful to be reunited with loved ones, and that list includes the likes of egg nog, dill pickle chips, clamato and Smart Pop. Oh, I ate!

Sometimes something hits your tongue and you’re transported back to a certain time. And this trip was definitely filled with the comforts of my youthful past. I went to the seafood restaurant chain Red Lobster, which brought me back to New Year’s Eve as a kid spent with my family before seeing a pre-midnight movie.

I had a cherry coke and a Thai burrito at Prince Al’s diner which reminded me of the afternoon’s where my best friend Ashton and I would skip college classes and just gossip in the diner for a whole afternoon.

My bff Krista and I found a Taco Bell during my stop in Toronto, reliving late-night fast food runs we had while teenagers during sleepovers. I mean, nothing goes better together than questionable midnight Taco Bell and questionable 90s movies like Double Dragon. And if you’re wondering if North American TB is different than the UK offerings – YES. I hate to say, it tastes better, but you also have a 65% higher chance of shitting your pants.

**No, obviously my diet was not balanced – I was on HOLIDAY**

But the one thing that brought me the most comfort while I was back home, was bologna.

My mom works in a school kitchen and always tried to make sure we ate pretty balanced as she saw what crap kids were shoving in their mouths on a daily basis. But she could never persuade me, my brother, and even my dad, away from bologna.

When I was a kid, I was a sucker for a fried bologna sandwich. Here’s the secret: You take some generic white bread. Toast it. While it’s toasting, take out a frying pan and slap a couple of pieces of bologna on it and fry until the edges brown and curl up. When the toast pops, slather with Cheez Whiz (on both sides.) Pop that sizzling bologna in between and VOILA, you have a true comfort meal.

I loved making these sandwiches and clambering to the basement before my brother could get the remote to watch my Much Music Countdowns.

I think this was one of the first steps of my kitchen independence, a “meal” I didn’t need my parents help with. (I soon took that independence too far when one day I attempted to operate the BBQ by myself singeing off my eyebrows and bangs… at least non-existent eyebrows were in at the time.)

I ate three of these sandwiches when I was back home – and they still taste fucking great. It’s probably the best for my digestive system that bologna isn’t readily available in the UK.

I’ve since learned that this concoction wasn’t the invention of a hungry 7-year-old in sleepy suburban Canada. When travelling through Nashville a few years ago it was on the menu of some of the city’s most famous food stops. And was gleeful to see that Loretta Lynn included it in her cookbook You’re Cookin’ It Country… probably a step up from my recipe. And if it’s good enough for Loretta, it’s good enough for me! 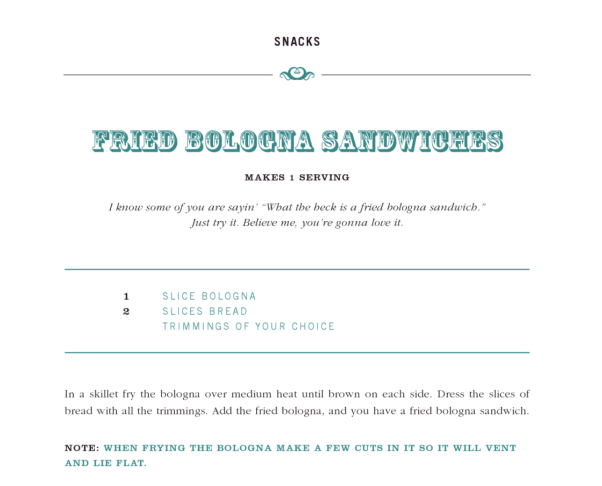 I mean, the quote says it all.

I know I am not the only one with *questionable* food habits from their childhood that has carried on to this day. Please share them with me so I don’t have to live with this shame alone!

In the meantime, I’m going to see if my new kitchen appliance has a bologna setting… I’ll report back.

One thought on “Nothing says 90s Suburbia like processed meat, cheese and bread”